For most of my time in Scouting I was an Assistant Cub Scout Leader at the 9th Barking & Dagenham Scout Group, in the District of Barking & Dagenham, which is located in the Scout County of Greater London North East.

I have been in Scouting since I was 7, joining the 9th B&D as a Cub (yes a little early with the GSL's permission!). I have been within the Group ever since then (over 25 years of Scouting). When I was a Scout I was asked if I wanted to come earlier and help out at Cubs, and I have never managed to get away since then!

I have been through a fair few jobs since then, including; ADC (Scouts), District Scout Leader, Newsletter Editor (Group and District), Directory Editor, Activity Team Leader, District Webmaster, County Webmaster, IT Advisor and a fair few others.

Along with Ken and Rose (who each have about 50 Scouting 'hats'), I ran a Pack and a Troop, and help out with Beaver events and run Explorer events for our Explorers. I have been involved in running District events (all sections) for almost all the time I have been a leader.

I feel very privileged having worked in a Group where all the leaders are great friends, as well as very keen on traditional Scouting, yet are not afraid to try modern ideas. I am lucky that I work in a District that pulls together and puts on a great deal for the young people without letting petty politics spoil things.

Over the years I have had the chance to work with pretty much all aspects of Scouting to County level. Having a finger in almost every pie has given me a unique perspective and I can appreciate the problems faced by people at various levels. However, at heart, I prefer to be at the coal face and I am happiest working directly with young people.

I have a vast amount of resources, ideas and helpful items that I have collected over the years. I have a room, garage and shed full of Scouting stuff! In resources based on paper alone, if I were to print everything off that I owned, you would need a small lorry to cart it all away! It would be nice if I could magically transfer everything to the site but I think I will always be fighting a losing battle in that respect.

If you want to see more photos of me or details of what I get up to, be sure to check out my District website.

The first version of this website began when I was at university, at a time when the World Wide Web was a new and exciting thing that few people had access to. It was a collection of resources, ideas and helpful things that simply were not available elsewhere on the internet (I know... I looked hard and decided to start up a site myself). It looked quite different to modern versions but then I had only just began to learn about Personal Computers or PCs and had taken my first steps in programming (Fortran) as part of my degree.

It is difficult to find an archive that has stored the full look of the site back that far, but I may dig out an old backup and take a snapshot.

This was the first version of the site and used frames.

Originally hosted on a free Geocities account it migrated a few times, bouncing back and forth from some university webspace, to a charity site, to one of my brothers domains.

The site started sometime in the summer of 1994. Which means, as far as websites go, it is very mature!

This version lasted all the way up to June 2000 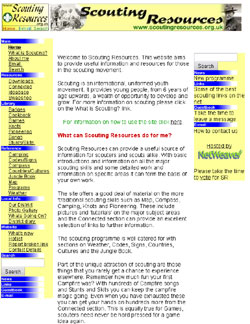 This was the second look to the site, replacing the original frames based, basic effort. This lasted all the way up to the end of 2002.

I was now hosting the site myself, having previously relied upon webspace provided by the university or kind charities and other Scouting people. 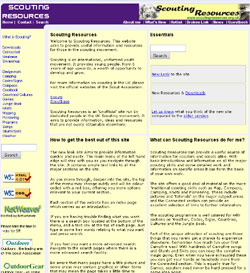 This was the third iteration of the site, mainly cosmetic it gave me the chance to expand the content area and use some features that the increasingly sophisticated browsers could handle. 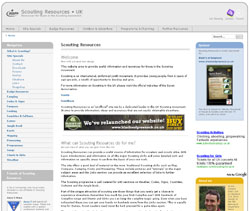 This is the fourth version of the site. It is now pure css, with no horrible tables to rely upon for layout tricks. The underlying 'code' is much cleaner and based on the excellent opensource multiflex templates.

2008 saw the launch of the fourth look to the site. In 2017 Scouting Resources will actually be 22 years old! Not bad going for a site produced by a single person as part of their voluntary work.

It is now 2019 and we are well into the 21st century. I am now experimenting with a move to a WordPress themed site. This would be a massive undertaking as it involves wholesale lifting of the content and setup into a completely different format.