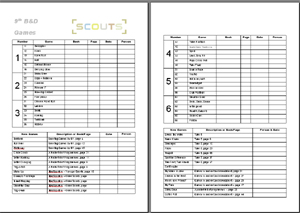 Troop programs in our Troop tend to follow the same sort of timetable used by the cubs (not surprising as the cub leaders ARE the scout leaders as well. This is not really a problem and it works very well in our group. Akela is also a Scout Leader in a nearby district, I am a District Scout Leader too and our GSL has a wealth of experience with both cubs and scouts, quite apart from our other assistant leaders).

Next to this will be published the details for that particular week. For example:

Now this is a very vague program and here is where you need to be careful. The Troop night program is decided upon by the patrol leaders under the guidance of the leaders (we normally have a program meeting with the PLs every 3 months or so). We meet up for a meal and a drink and they decide what games and what work they want to do, asking appropriate questions and after talking with the leaders about what needs to be done and the upcoming competitions. However the leaders still have a great deal of control as much of the basic 'progressive' work may well end up being decided upon by the leaders themselves although this is normally solved at the program meetings.

The scouts plan and run their own games (in theory...). The PLs decided upon a list of games and the leaders distribute these across the program being it is printed and handed out. Each week we have a duty patrol who are responsible for collecting subs, flag, running the games etc. They are not allowed to play the same game more than once (per program set) and similar games are not allowed either (no consecutive crab football, football, table football...they are spread out across the program). 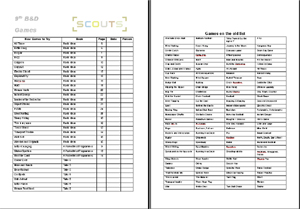 It is not unknown however for the leaders to step in and run a game (either because they have been asked by the scouts or because of poor behaviour or some other problem.

The main outlines of the work is decided upon in the PLs program meeting. They are encouraged to pick out a few activity badges to work on and perhaps some main themes. They have to bear in mind upcoming competitions that may need some practice work. Much of the detail is left to the leaders though as they tend to be the ones that 'deliver' this part of the program.

Another 'tradition' that has arisen from these program meetings is trips out. Back at the end of 2001 one the of PLs said "why cant we go to Southend for a night?", and our leaders being proper scout leaders all replied simultaneously "no problem, you sort it out then!". With a little help she duly did and planned and executed a very enjoyable trip. This then followed through the other PLs and APLs and over the course of a year or so they planned and completed: Southend trip, bowling night, duxford trip, tower of London trip, ice skating and Southend trip (different PL).

This is now a common part of their program planning. Indeed we have a problem fitting all these dates and activties in that they want to organise. They also plan and run extra camps. A list of the events my Troop has attended is available.