The apparent position of magnetic north will vary according to your location in the world (most importantly your latitude) and you will need to know the difference between these two positions (magnetic and true north) to take an accurate bearing. Information on the deviation between the two will be found on any (Ordnance Survey) map, and should not be assumed as it can vary by a relatively large amount according to your location.

If the deviation is not given you can find it from the Pole Star or by using the watch method to point to north (see Tracking - Direction Finding methods). Then lining up the compass with the grid lines on the map you can discover the variation if there is one.

Note: If you intend to reverse this process...that is to take a bearing from the 'field' and read it back onto the map then you will need to SUBTRACT the 4°.

Note the last paragraph in the map extract on magnetic variation above. If you look carefully at your map, at the top and bottom of the map (usually in the centre) will be the information above.

If you draw two lines connecting the circle at the bottom to the two arrows at the top of the map you will have a large version of the diagram in the first table going across your map. This will illustrate how the magnetic variation becomes increasingly important the further the distance you are travelling in a straight line. Imagine travelling 40 km (40 grid squares) along these lines, and then look at how far away from your intended destination you will be (measure 40 km along each line and compare the distance between the two end points). This would be your error if you did not take magnetic variation into account. (On this map the distance is almost exactly 4 km 'as the crow flies') As I have said earlier, if you think about it this is not a great deal (in relation to other errors and considering that we very rarely travel 40 km in a straight line without any checks that is...of course 4 km on its own IS a large error!), and for most situations we do not concern ourselves with this correction, but in some work it may be important, and it may be more important at your location. 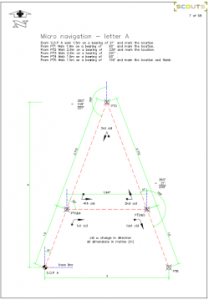 Be sure to check out the excellent resources provided by Graham from the 12th Andover West. The micro navigation resources are work of the highest quality and an incredibly useful tool to help those who are teaching bearings