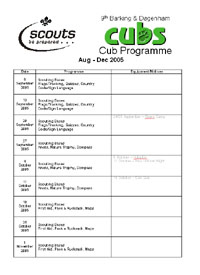 A program? Program? What's that? A program is the thing that we spend ages preparing and then completely ignore on the night! We normally 'publish' a programme either side of a laminated sheet (cubs+coffee+programme = soggy mess) that shows what we are doing for the next 3 months. Our programme follows a set layout as regards times. We meet for two hours and try to make sure that the Cubs get a good mix of games and 'work'.

[this is the latest version, we used to run game, work, game, work but a few years ago the cubs got used to working through in one session. Done correctly this should not present a problem and they should not notice how much 'work' they are doing.]

Next to this will be published the details for that particular week. For example:

Now this is a very vague program and here is where you need to be careful. The leaders in our group (claim they) are experienced and we tend to either prepare the Pack Night in detail beforehand and prepare all the work, or make it up as we go along on the night.

Our 'program' is really just a reminder to ourselves on what we are supposed to be doing that night. Details are discussed and noted but are not wrote down in the program. I believe that a program needs to be very flexible. This is where it becomes difficult. How do you 'stick to the program' whilst being flexible?

You have to be prepared to change at a moments notice. Perhaps the game is unsuitable, perhaps Akela forget to bring the spoons in for the Handcraft, perhaps Baggy couldn't print out the maps for the competition. A million and one things can, and will, go wrong.

Have a backup plan. Always be ready with some Scouting 'work' that can be picked up at a moments notice. For instance...if we have a few minutes to spare and the Cubs need to do 'some work' as opposed to a game I might whip out our ropes and do a 5 minute knotting session.

It would be next to impossible for someone to walk in and take over the Pack Night by following our program. Sure it has the times there but it doesn't tell you what to do! Only the work is alluded to...the games to be played are not mentioned at all!

This can be a dangerous thing. Our program only works in our Pack because the leaders are experienced, communicate well and get on with each other. Any problems regarding the program or what the cubs are learning can be solved on the spot or over a drink or two.

In other Packs it can be vital that a clear detailed program is laid out for people to follow. This must include details of the work and games, where they can be found (e.g. books and page numbers), equipment needed and any special notes. It must be idiot-proof. Any sensible adult (not even a leader) must be able to pick up the program and run the Pack night if needed. 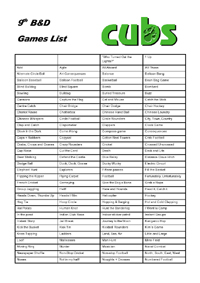 I tend to make a lot of the games and work up....I just create and improvise on the day. This is difficult to do if you do not have previous experience of the activity. How can you make up a knotting game on the spot if you don't know any knots? Or indeed if you have not played any sort of knotting game before?

The games are often decided upon on the Pack Night. I used to have a browse through some games books or on the net and pick out 5 or so new games that we have not played before. Some will be skills based (to help with some 'Scouting' work), others will be just plain fun. However now I tend to have a large list of all the games know, like and some new ones printed out (about 50 or so on the sheet) and I let the Sixers or the cubs choose which game they want to play that night and cross it off. They cannot play the same game twice without going through the sheet so this stops all the 'football every week' problems and they end up playing almost all the games on the sheet anyway but they think they are getting a 'choice' each week.

However there are times when none of these are used. You have to be able to play it by ear on the night. If they are getting rowdy a quiet game may help. Then again a very active game might help them to let off steam and tire themselves out.

I tend to mix the games between quiet and active. Many of them introduce 'work' into the equation. E.g. some mini-pioneering, a knot race, a challenge of some sort, a mapping relay. The Cubs do not see this as work at all if it is handled the right way, and if they get used to it. This means they are effectively 'working' almost all night. In fact..if presented in the right way almost anything can be included as a 'game'. 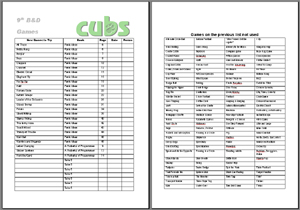 I almost always start with an active game. The last 5 minutes of the night it has now become popular to play a simple 'if the ball touches you, you lose a life' game. This involves them running around like headless chickens and me chasing them. Very tiring but they enjoy it and it seems to help to 'quieten' them down for Grand Howl and Flag at the end.

One variation we have tried for the last year or two is instead of allowing the Sixer to choose the game from the list as we used to do, they have the option of either choosing a game from the new game list or rolling a dice.

We have a large sponge dice, they roll it twice to give a number between 11 and 66. This is then the game that they play, they simply write their name and the date next to the game with that number and run it. 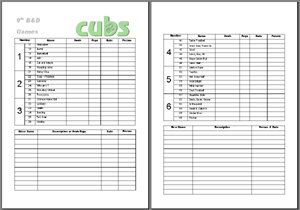 We now work in one main session. This may involve some general 'progressive' badgework or it will focus on an activity badge or two. This should mean that the cubs are not only regularly advancing their general knowledge of scouting but are also getting to do all of the stuff that interests them.

As mentioned above the times and sessions are not absolute. There have been nights we did little but play games. There have also been nights when the Cubs worked steadily on something for more than an hour (because they wanted to and didn't notice the time...not because they were forced to or it was a particularly lengthy piece!). In addition much of the 'game' time is taken up with Scouting work whether they realize it or not.

You have to be flexible and sensible again. Sometimes the work will be very informal and rowdy. However...I mainly make sure that they work quietly, sitting down and concentrating.

Don't be afraid to mix and match work, or even to 'double up'. We often work on our safety badges (personal, home and road)...all three at the same time. There are many overlaps and it is sensible to do all three at around the same time. You simply have a safety theme.

I personally try to ensure that there is always an element of 'traditional Scouting' each night....By that I mean things like map, compass, knots and so forth. It is important to practice these and not to get completely sidetracked by other items and interests. These also tend to be the skills that need regular work or else the standard slips.

For both sessions you can run multiple bases if you have the help. We once covered Computing, Cook and First Aid over a 9 week period with 3 sixes rotating each week. This also tends to keep them fresh and interested but still ensures that they improve and work hard over a short period.

In Autumn 2005 we had 3 bases each night, for 3 nights in a row, then switching to another 3 for the next 3 weeks. These were map, compass, first aid, knots, carry a message, pack a rucksack, country code, tracking signs, nature, flags, sign language, IT badge, cooking.