The Complete Guide to Knots and Knot Tying 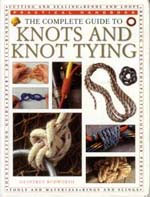 Outstanding....contains a massive amount of useful knots with clear step by step photos on how to tie them and a description of their appropriate and inappropriate use. This also includes some very useful knots that don't seem to be in some of the other good books.

Even the Further Information section at the back is a mine of information for those seeking further know-how or how to obtain rope and cordage (in the UK).

Quite simply a Must Have for any Scout Group 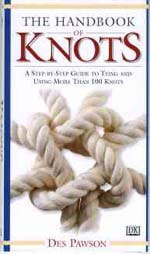 This is a brilliant book for anyone interested in knotting (or teaching knotting). Beginning with basic techniques and terms Pawson introduces you to those important subjects often missing from other knotting books; Different rope types, terminology, splicing, coiling and rope care. The remainder of the book is split into sensible sections such as Hitches, Bends, Stopper knots etc. All the 'major' knots are covered and many more, including many that are more decorative rather than practical. Each knot has a full colour diagram with the finished knot neatly displayed, an easy to read diagram or two on how to tie the knot, its uses and any background information. The diagrams and descriptions are clear and useful enough to make this a 'direct' teaching aid and is a valuable addition to any scouters library (i.e. those scout patrol boxes).

The Handbook of Knots 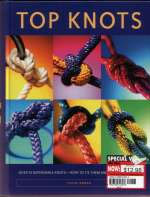 This is a lovely little book. The ring binding means you can have the book open practicing the knots without needing to be an octopus. The steps are beautifully photographed and clear.

Contains most of the useful knots, some basic lashing and a few others (including the Turks Head).

Recommended if you can get hold of a copy. 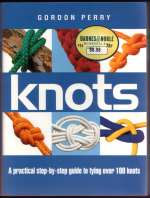 Over 100 knots, all clearly illustrated (clear diagrams, not photos). Contains a good deal of knots including some very useful ones not mentioned elsewhere (the Icicle Hitch for example).

A nice compact size with many useful knots.

The Klutz book of Knots 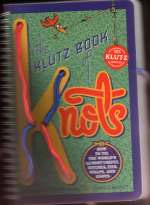 This is an interesting one. Consider part of an 'idiots guide to...' series. It comes with two short lengths of line and holes in the book.

Each knot has an explanation with appropriate holes in the other side of the page (the pages are thick card) with a picture where you thread the rope through and practice the knot while reading the instructions.

A very novel idea and one that may work well with those struggling to learn and practice their basic knots.

Limited for general use by the short number (24) of knots.

The Klutz book of Knots

An easy one to review. This is in fact a cut down version of The Complete Guide to Knots and Knot Tying. 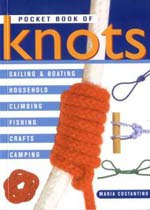 This book has some lovely clear diagrams. It approaches the layout in a unique manner...grouping the knots according to uses such as Craft, Household, Sailing, Fishing, Climbing and Camping.

Not every useful knot is represented but those that are are clearly explained with useful tips on suitability. The diagrams are among the clearest I have seen.

The RYA Book of Knots 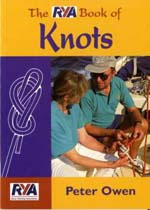 The book contains black and white drawings on, naturally, the majority of knots that are suitable for a nautical related use.

Nice clear diagrams although dont expect every suitable scouting knot to be represented, but those that are are done well.

The RYA Book of Knots 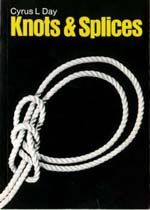 The smallest of the books here but with some excellent descriptions. The accompanying text includes not only instructions but alternative names and methods and uses.

The diagrams are in fact photographs and this does make some of them difficult to look at and interpret.

An unusal size which would suit smaller (but longer!) pockets. The addition of some splicing methods adds a little to the normal variety of knots you would find in such books.

The diagrams are clear and useful but the notes, while succinct, are perhaps a little lacking in detail. 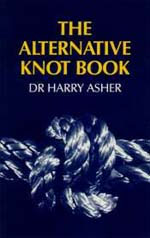 This book attempts to introduce a new system of knotting. Complete with labelled diagrams it takes you through some old favourites as well as some brand 'new' knots.

The system can be a bit confusing at first but if you have the patience it may be rewarding.

There are several useful knots here that are not covered by the other books and although some of the diagrams need more steps and explanation the majority serve their purpose.

This book is perhaps better suited to the more experienced knotter.

The New Encyclopedia of Knots 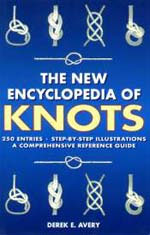 This book came in a video case (but no video alas) along with several small pieces of coloured string with which to practice.

Arranged as an alphabetical 'encyclopedia' the book is fairly comprehensive although there are some obvious omissions.

Each of the 250 entries includes its use and a simple paragraph describing how to tie the knot.

Some of the knots have a clear illustration.

Again a useful addition to every Scout Groups library

The New Encyclopedia of Knots 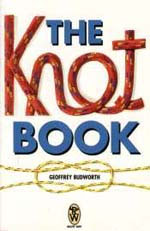 The book covers the basics of ropemaking as well as some history and terminology.

The knots in the main section are arranged according to use which makes things a lot easier.

The book also includes 'extras' such as rope and knot tricks as well as explaining some more practical uses of the knots which some other books curiously seem to omit (e.g. harness, heaving lines).

Much of the book is well illustrated with black and white drawings and the explanations are reasonably clear.

A good source of information and cheap enough to buy for the patrol/individual. 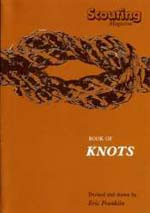 This book is a reprint of a series that ran over 13 months in the UK Scouting magazine. It consists of 98 'Knot Charts', each of which is a single page with basic information on one or more knots in black and white.

Most pages include a rudimentary guide as to how to tie the knot along with pictures of the completed knot.

The series includes many of the most useful knots as well as much information on whipping, lashings, lanyards, sinnets and even knots for decorative use (e.g. mats and bookmarks) and nets.

There certainly is a good deal of information and the book is a welcome addition to any patrol box although some of the knots would benefit from more information and instruction.

A Beginners Guide to Knots 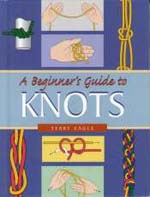 The book came as part of a 'package' picked up in WH Smith. The box consisted of the book and four pieces of coloured thin rope.

The book is well illustrated with coloured diagrams and covers a few basic knots as well as some sennits.

The diagrams are clear and include several steps and the accompanying text is reasonably easy to follow.

If you can get hold of one you may find them useful for the younger Scouts or Cubs.

A Beginners Guide to Knots

As the title suggests this book is full of useful 'silly things' you can do with string or thin rope.

There are plenty of magic tricks and pretty looking braids that you can practice.

The book contains some hand drawn images and could be clearer in places although it they serve their purpose.

Useful for those rainy days as well as picking up an idea or two for some more ambitious rope use (e.g. nets).