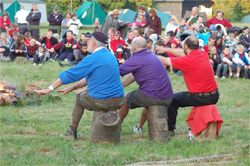 The first person of the team comes on stage crying. The next person comes out, asks the first one what's the matter and the first one whispers in his ear. Then they both start crying, long and loud. Several others come out on stage, one at a time and repeat the same action. When everyone is on stage, crying, moaning, howling, sniffing and so on (using large handkerchiefs that were dipped in water before their entrance and wringing them out splashily) the last person comes out and asks aloud: "Why is everyone crying?" They all answer in unison: "Because we haven't got a skit!"

Two to four hunters talking together each says that he is packing a heavier and more powerful gun to shoot with. The first starts out with a small handgun and the last ending up with a very powerful rifle, shotgun, whatever. Two others come over who have overheard the hunter and want to settle a bet. Are the hunters going after wolves or moose. One of the hunters relies," "Why no, we are going after mosquitoes!"

A leader begins to explain how to lay a campfire. The leader decides to use members of the audience to represent different pieces of wood. The bonfire builders bring up various volunteers. Some of the volunteers are bunched in the center for tinder with others placed for kindling with the "big" logs stacked on top of each other in increasing larger sizes. The leader then says that the fire is ready to light, strikes a match, whereupon, several accomplices yell out that its ON FIRE and dash several buckets of water on the fire.

Six or eight weary-looking campers enter the campfire circle, silently circle the campfire once, and sit in a ring around the fire. After a pause, the first camper sighs and says "What a day!" There's another pause for deliberation before the second camper sighs and says, "What a day!", and yet another before the third repeats, and so on around the circle until they reach the last camper. He sighs and says, "Yes sirree!" (or "You betcha", or something similar). After a long silence, the first camper says in disgust, "If you can't stick to the subject, I'm getting out of here! " Then he rises and leaves the campfire, followed by all the others.

PROPS: A cardboard cutout of a prison window, or a few sticks as bars, and 3 candles.
ANNO: The scene is the outside of a prison.
[Enter 2 Scouts. One holds out his arms at full stretch, one above the other, and the second inserts between them the window or a number of sticks of wood to represent the bars of a cell] Enter the prisoner. He peers out through the bars.] [Enter the prisoner's friend, with a bow saw concealed behind his back. He hands it to the prisoner, who goes through the motions of "sawing" through the bars of his cell] Prisoner: [emerging joyfully I'm fwee! I'm fwee! [Enter 3 Scouts, each carrying a lighted candle, signing: Happy Birfday to you, Happy birfday to you!

Characters: two customers, waiter. Let actors develop actions and dialogue from the situation Props: table with tablecloth, candles, menus, etc. Most important - a storybook Two customers enter a fancy seafood restaurant, study menus, etc. Waiter strives to take orders. One customer orders shrimp. The second says, "I'd like a lobster tail, please. Waiter says appropriate things, goes away, returns with storybook, sits down near customer two but facing audience, and begins reading: "Once upon a time there was a little lobster...

The Easter Bunny is out delivering his eggs and the police arrest him for breaking and entering a house. The police don't believe that he is the Easter Bunny, but finally decide to believe him and let him go. He decides to finish delivering and tries to enter another house where an old lady or man accuses him of stealing. The Bunny says, "Oh no, not again!" and is run off the stage by the old lady swinging a stick or umbrella.

There is a glass of water in the middle of the stage. First scout crawls across the floor crying for water. He dies dramatically shortly after beginning his crawl. The second person dies just short of the glass of water. The third person on his last bit of strength really hams up his desperation as much as he can. He reaches the water, takes out a comb, grooms his hair with the water, sighs with relief and goes off stage.

Child is told to clean room. The child hates to clean his room so he gets out his book of magic spells and use one to clean the room. Unfortunately, the room gets worse with clothes etc. thrown in >from offstage. This happens again twice. The child decides he might as well clean up this mess and proceeds to do so. When the room is finally clean, the child is ready to throw the magic book in the garbage. The child talking to himself says, "Enough of this Hocus Focus". More stuff flies in. The child moans not again!

A person enters the room pulling a rope behind him. When a leader asks, "Why are you pulling that rope?" The person replies, "Have you ever tried pushing one?"

The person can top the stunt later in the meeting by coming in while pushing a rope which has been made stiff by tying it to a wire.

An object flies through the air and lands on the stage. Boys come onto stage and begin examining the object. The boys say such things as "It’s from Mars!", "What is it?", and "Let’s get an expert!". An expert with a magnifying glass strides onto the stage. As he studies the object, he says, "It says I will not talk in class. I will not talk in class."

Pluck hair from a beard, Use as a tooth pick

Pluck a hair from head, Lick fingers and stretch hair till long enough to pass through head from ear to ear.

Take out hair and wipe it down, Lick fingers and stretch again.

Swallow hair, retrieve it from bottom, Seesaw action to clean out body

Pull out and wipe down, Lick fingers and stretch hair even longer with another person to make a skipping rope.

IT’S ALL AROUND ME

Cast can be any number of people greater than three. One member acts as the healer. Everyone is crying except the healer.

The healer goes up to each person in turn and asks them what is wrong. ( Each person has to invent a problem)

After healer has been told the problem he either heals or offers words of wisdom.

After which the person stops crying.

When he gets to the last person "I am a Scouter from St. Albert" is the answer he receives.

The healer then sits down and cries with the Scouter.