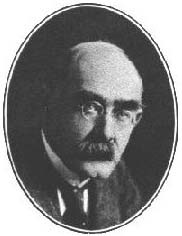 (1865 - 1936)
Rudyard Joseph Kipling was a writer born of British parents in Bombay, India. He was educated at boarding school in England and returned to India in 1882 where he worked as a journalist. His satirical verses and short stories, such as Plain Tales From the Hills (1888) and Soldiers Three (1892), won him a reputation in England, to which he returned in 1889 and settled in London.

His verse collections Barrack Room Ballads (1892) and The Seven Seas (1896) were highly successful, as were the two Jungle Books (1894-5), which have become classic animal stories. Kim appeared in 1901, and the classic Just So Stories in 1902. Later works include Puck of Pook's Hill (1906) and the autobiographical Something of Myself (1937).

He was awarded the Nobel Prize for Literature in 1907 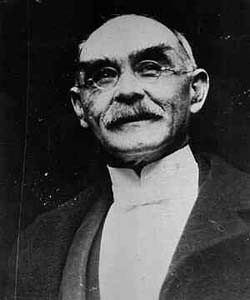 Baden-Powell needed a concept around which to build the scouting program for wolf cubs (as they were then). The original Jungle Book was written in 1894. It was originally published in chapter form in the American children's magazine, Saint Nicholas. Kipling was also the author of "The Scout's Patrol Song" which was the official Boy Scouts of America song. Part I of the 1908 booklet, "Scouting For Boys" included a condensed version of Kipling's Kim. He was also the father of a Scout and later a comissioner in the British Scouting program.. In 1924, he attended a rally of 6 thousand Wolf Cubs at the Imperial Jamboree at Wembley where he witnessed what Baden-Powell had made of his writings.. Jungle Book and Cub Scouting