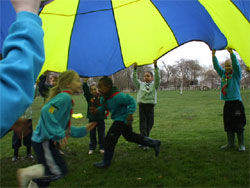 Equipment: 'clubs'
The players are divided into teams and line up. In front of each team is a small circle and ahead of this are a row of crosses about a metre apart. On each cross stands a club. The first player runs out and brings in the clubs one at a time in any order placing them in the circle. Then the next player runs forward and puts the clubs back, one by one. play continues until all the players have been out and moved the clubs. The first team to finish wins.

Equipment: A set of skies and poles for each team (e.g. shoe boxes and garden canes), cones or similar.
The players are divided into teams. Some cones are set out in front of each team as obstacles. When the games starts the first player puts a foot in each box and with a cane in each hand 'skies' in and out of the obstacles in front of them, to the far end and back. Then the next player goes.The first team to finish wins.

Equipment: ball and length of rope per team, chalk
Draw a circle in front of each team and a boundary line at the other end of the hall. Each team places a ball in the circle. When the game starts the first player from each team holds the ends of the ropes and drages the ball up the hall past the boundary line and back down to the circle. Then the next player goes and so on. the first team to complete the relay wins.

Journey to the Moon

Equipment: National flag for each team
The players are divided into teams and sit in a circle, each player given a number. The flags are placed in the centre. The leader calls out a number and the 'orbits'. The player with that number collect their flags, run out of the circle through their own space and 'orbit' the correct number of times. They then rush back into the circle to place their flag on the 'moon'.

Equipment: Cotton reels for each team
The players are divided into teams. the cotton reels are placed in a pile in front of the team. The first player runs up and puts one reel on top of another. then the second player must place one on top of that and so on. If the tower is knocked down the player must rebuild it but the team captain may come out and help. the team to finish first wins.

Equipment: Suitcases, Umbrellas, Hats, Coats, Gloves, Scarf's
Divide the players into even teamsand line up each team in relay formation. Place the suitcase, filled with the clothing, in front of the first player on each team. On ‘Go’, the first player opens the suitcase, puts on all the clothing and runs down to the other end of the playing area and back. Here, they remove all the clothing and put it back inside the suitcase, shut the suitcase and tag the next player in line. That player opens the suitcase and gets dressed and runs down the playing area and back. The relay continues until all players have had the chance to get dressed, travel and unpack

Variations: Provide additional articles of clothing or accessories, to make the outfit even funnier

St. George and the Dragon

Equipment: Easels, Pieces of Bristol board, Straight Sticks, Needles, Pins, Balloons, Set of Cardboard Armour
In preparation for the relay, a picture of a dragon is drawn on each piece of bristol board. Next, balloons are attached to the ‘dragon’. The dragons are set up on easels, 6 feet apart, at a designated distance from the starting line. Finally, the needle is attached to the end of each stick, in order to create dragon-killing ’lances’.
Divide the players into two or more teams. One boy acts as a horse, while another acts as the rider. On ‘Go’, one pair from each team rides to the starting line. The riders put on the armour, pick up the lance, and remount their horses. Then the charge begins ! Using the lance, the rider breaks one balloon on his team’s dragon. He has only one try. When his attempt is over (whether successful or not) the ‘horse’ gallops back to the starting line, where the couple gives the props to the next pair from their team. The relay continues until both dragons are ‘dead’ (balloon-less)

Equipment: Paper and Pencils
Players are divided into teams. The first player in each group walks to the end of the playing area, picks up the pencil and draws the head of a man, woman or child. After he draws the head, he folds the paper so that only the neck shows. He then walks back to his team and tags the second player in line. The second player walks down and draws the shoulders, folds the paper, walks back and tags the third player. The relay continues on down until the figure is complete with waist, hips, legs and feet.

Notes: The fun of this relay is opening up the piece of paper and passing around each ‘creature’ that each team has created.

Equipment: Blindfolds
The players are divided into teams with a 'leader' for each team standing in front of them. The first player in each team is blindfolded and the leaders change places and try to bring their team members in by radar (i.e. calling them by their teams name). The first player to fly home gets their team 4 points, the second 3 points and so on. The next player is then blindfolded and the leaders change position again and continue the game.

Equipment: Ball
The players are divided into teams with a chair in front of each team. The first player grips the ball between their feet and hops around the chair and back to their team. They hand over the ball and the next player goes. The team to finish first is the winner.

Equipment: Pack of cards per team, 4 large cards for each suit
The players are split into up to 4 teams and line up at one end of the hall. A pack of cards is placed in line with each team at the other end. The leader has four large cards with a suit on each. When the game starts the leader holds up one at random and the first player in each team runs to his pack of cards. They cut the cards and if the suit cut is the same as on the card the card is discarded from the pack. They then run back and the next player goes. The leader can change the displayed card at any time. After a set time the discarded cards are counted according to their value (e.g. ace =1 ...king =13). The team with the highest score wins.

Equipment: lots of balloons, chairs
The players are diviided teams. At the other end of the hall is placed a chair with a balloon on it. When the game starts the first player runs to the chair and tries to burst the balloon by sitting on it. When it goes bang they run back and the next player goes. The team to burst a set amount of balloons first wins.

Equipment: dice, shakers, pencils, paper
The players are diviided into teams with a leader for each team equipped with a dice, paper, shaker and pencil. The leader selects a target of 10 numbers from 1 to 6 and writes these on the paper. When the game starts the first player from each team runs out, takes the dice in the shaker and attempts to throw one of the numbers on the list. After one throw they go back and the next player runs out. Each time a number is thrown the leader crosses it off. The first team to complete the list wins.

Equipment: 2 balls, chalk
The players are diviided into two teams and they take up position diagonally opposite each other. In the centre a goal is marked with chalk or chairs. A ball is given to each team and the players are given a number. When you start number 1 must dribble the ball anti-clockwise around the room, bouncing it against the wall between each marked goal in turn. Then they go back to their team and the next player does the same. The first team to finish wins.

Variations: Have one team going clockwise and one anti-clockwise. Allow the teams to interfer with the other teams ball

Equipment: 1 Straw per player, 4 paper tissues
The players line up in their teams. The player at the front has a paper tissue which they must stick to the streaw by sucking. They must transefer to the t second player in line and so on to the end. The first team to transfer the tissue wins. No hands may be used.

Equipment: Chairs
The players are divided into teams and stand on behind the other. When a certain make of car is called the front person runs around a certain point (marked by a chair or similar) and back performing the appropriate action. This is repeated until everyone has had a turn.

Equipment: Balloons/Balls or similar
The players are divided into teams and stand on behind the other. The front person is given an object, and when told to start, must pass it along the line alternately over the head, and under the legs. When it reaches the last person they run to the front and continue the under-over. Repeat until the whole team has been round once. The first team to sit quietly ready is then the winner