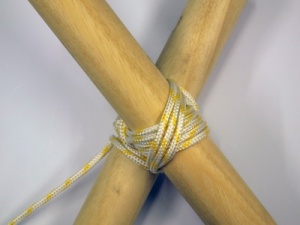 A Diagonal Lashing is used to bind two poles together that cross each other but do not touch (or are likely to be pulled apart) when their ends are lashed in place in a structure. Often used for securing diagnal braces used to hold a structure rigid.
When wooden poles are used in a lattice like structure a combination of Diagonal and Square lashings is used to hold them together.

The Diagonal Lashing can be used to bind poles that cross at an angle of between 90 to 45 degrees. If the angle between the poles is less than 45 degrees a sheer lashing should be used.

Note: If a square lashing was used to bind poles that do not touch the beginning clove hitch would pull the cross pole towards it causing unnecessary bowing of the cross pole and could also produce a force that would act along the length of the pole to which the clove hitch is tied. This could place unnecessary strain on other lashings and cause the structure to twist and fail.