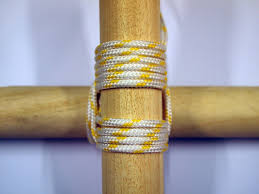 A Square Lashing is used to hold two poles that cross each other (usually at a 90-degree angle although not necessarily). If the angle of contact is less than 45 degrees a sheer lashing should be used.

It can also be used where the load on one pole may cause it to slip over the other.

It is important to note that there should be no tendency for the poles to slip apart. If the force tends to separate the poles only the rope will be supporting the load.

To make this lashing as tight as possible it is important to tighten each turn as it is made. Frapping turns stabilize the lashing and tighten it further.

When tying a square lashing, the poles and the rope must be positioned properly to achieve the maximum strength. The cross pole should be positioned so that the force applied to the cross pole is directed toward the pole it is lashed to. This allows the contact between the wood to take part of the load.