A loop tied in the bight. One of the several so called 'Butterfly knots' which are used for the middle man on a rope when rock or mountain climbing. More than one of these knots has been called the 'Alpine' Butterfly but the knot illustrated is believed to be the most effective in use.

A loop tied in the bight. One of the several so called 'Butterfly knots' which are used for the middle man on a rope when rock or mountain climbing. More than one of these knots has been called the 'Alpine' Butterfly but the knot illustrated is believed to be the most effective in use.

- There is no single specific knot known only by this name but the Fishermans Bend probably has first claim to the title. A variety of other hitches has been used for this purpose including the Round Turn and Two Half Hitches.

Another name for the Middleman's Knot.

Another name for the Man Harness Knot.

A relatively recent knot and an excellent choice for a bend.

A simple and effective stopper knot.

An excellent hitch which only requires a single pass round a post or spar, yet provides a double bearing. It is particularly useful when hitching to objects, access to which is difficult (for example, fixing a tow rope to the axle of a car)

Also known as Crown Splice and Dog Pointing. A simple and effective method of finishing the end of a rope in which a Crown Knot is made with the strands at the end which are then spliced back into the rope. It is clumsy compared with Whipping but useful in an emergency or if it is desirous to know by feel when the end of the rope has been reached.

An effective hitch for slinging or hoisting cases, bales, logs, etc. It cannot jam nor slip and is immediately cast off. It is the commonest form of Barrel Sling when the barrel must be hoisted with the bung uppermost. It has the same form as the Lark's Head Knot.

Definition: The eye or hook of a pulley block. A rope handle on a sailors sea chest. An eye in the end of a rope. There are also certain specialised meanings.

Any hitch that is made on an eye, etc. (i.e. on a 'becket' is a Becket Hitch but the Becket Hitch is the one illustrated here. It has the same form as the Sheet Bend).

To secure a rope with figure-of-eight turns around a belaying pin or a cleat, etc. Climbers have adopted the term from the sailor: the leader on a climb 'belays' the following man by passing the rope across his shoulder or waist, taking up all the slack and paying out or drawin in under friction as the second man climbs.

Published more than 10 years ago in climbing publications, the Beer Knot is used to join 2 pieces or ends of tubular webbing together to make a sling or runner. While the customary Ring Bend (Water Knot) tests at 50-65% of strength (depending on which reference you read), the Beer Knot is consistently at 80% as tested by PMI. The Beer Knot is left tied, not removed as others are. It is useful for anchors or other uses when you don't need to re-tie to adjust for length. Easily tied on new webbing, it is a bit of a challenge with used webbing.

Gary Wilson: From the text of "On Rope" (revised edition) by Bruce Smith and Allen Padgett, page 51: "At an NSS Convention in the late 1980's, Peter Ludwig from Austria presented the Beer Knot"

A method of taking up the slack of a rope when one end is secured at a height with the rope hanging. So called because it is a common method used by bellringers to hoist up the bulk of the rope off the floor and out of the way. It is actually half a Sheepshank.

Definition 1: The portion of a rope between the end and the standing part. 2. Any slack part of a rope, particularly if in the form of a loop or partial loop.

A simple yet secure method of fastening a rope to a hook: it should only be used when the thickness of the rope is nearly enough to fill the mouth of the hook. The Double Blackwall Hitch is a variation in which a turn is taken round the neck of the hook.

A multiple Overhand Knot tied in the end of a heaving line. It derives its name from its use in a ropes end which was used as a weapon or for inflicting ounishment, when it would often 'draw blood'. This knot was used by the Incas of Peru in 'Quipus' or knot records.

The most useful and one of the simplest ways of putting a fixed loop in the end of a rope. It is easy to tie and to untie, it never slips nor jams and has a high breaking strength. It has been called the 'King of Knots'. 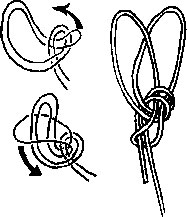 A double loop knot which is tied in the bight when the two ends are fixed or inaccessible. The strain should come equally on both standing parts. A good rescue or chair knot.

An excellent and safe knot. Since the second half-hitch is jammed inside the first it is superior to two half-hitches.