Definition: A spliced, seized or knotted loop in a rope, usually at the end. It will often be fitted with a thimble.

A method of putting a permanent eye in the end of a rope. The strands are unlaid, a loop of suitable size formed and the three strands spliced or worked in and out of the rope, usually under and over. Three 'tucks' are normally taken.

Definition: The rope of a tackle or sometimes the hauling end of a tackle.

An excellent loop tied in the bight. It has a good lead, is strong and secure and is tied by an ingenious and easily remembered method. It is to be preferred to the better known Man Harness Knot.

Permission is granted to copy, distribute and/or modify this document under the terms of the GNU Free Documentation license

Sometimes called the Flemish Knot. A single strand Stopper Knot, usually when only a temporary stopper is required or when using small stuff. 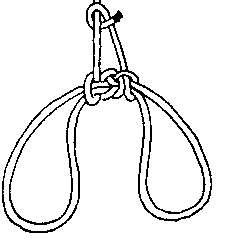 A double loop knot used for lowering an injured person from a height. It is tied in the bight, one end secured aloft and the other end used to control the direction of lowering. 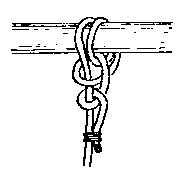 This is one of just three knots incorrectly called 'bends' which are actually hitches. It is strong and secure and is probably the most used Anchor Hitch, apart from being an excellent hitch for all normal purposes.

Also called Water Knot, Anglers Knot etc. It is formed from two overhand knots each tied round the opposite end: it is very suitable for rope in general and is used mainly for small stuff. It is, however, beginning to find favour amongst climbers as a bend for nylon rope.

Definition: A turn, or a number of turns in a coil of rope. Falking - Coiling rope in various ways.

A stopper knot for the end of a rope. It is similar to the Diamond Knot but is tied by first making a Crown with the unlaid strands and then a Wall Knot below the Crown, the ends being brought up through the centre of the Crown. This knot can be doubled by following through above the first lead. The name is often applied also to the Standing Turks Head.

Definition: Crossing turns taken in a lashing or on the leads of a tackle to both tighten and secure them.