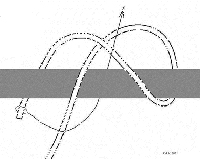 Draws up without working to form a strong, secure hitch that will not jam. It may be used as a way to tie a smaller rope to a very large rope. (The smaller rope should pull left when tied as shown here.) Push a bight through the final tuck to form a Slipped Sailor's Hitch.

A first-class method of slinging a plank to make a platform for such purposes as painting, etc.

Definition: A binding or lashing of small stuff for example, to secure an end to the standing part after making a bend or hitch, to make an eye round a thimble, to draw two ropes together, etc. 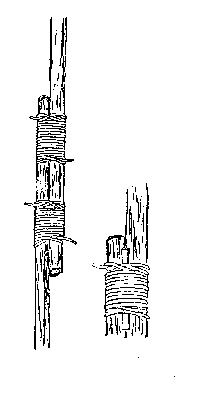 Two spars lashed together at one end and guyed. Used for lifting heavy weights

A lashing used to produce Shear Legs or, alternatively a lashing to secure poles or spars end to end.

A knot tied in the bight for shortening a rope or taking up the slack, without cutting it. It can also be used to protect a weak, damaged or frayed section of the rope. See also Tom Fool Knot.

Definition: A rope used to trim the lower edge of a sail.

The most useful and practical knot for bending (tying) two ropes together. Note that to be correct the two ends should be on the same side of the knot. If the two ropes differ in thickness, a Double Sheet Bend should be used.

The best method of joining two ropes together end ofr end, provided that the spliced rope does not have to reeve through a block. It is stronger, more secure and more permanent than any bend.

Braided cordage, formerly always made by hand but now often by machine. Its particular advantage, apart from being decorative, is that is does not have the same tendency to kink as laid rope.

Definition: Any bend, hitch or knot in which the final or securing tuck is made with a bight instead of an end. By pulling on the end, the knot can then break and release the load. Thus a 'Half Bow' is a Slipped Reef Knot. 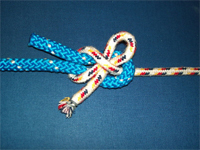 A method of securing a load temporarily and ready for instant casting off, in which a bight is simply held by the tension on the standing part. Not to be confused with a Slipped Hitch.

An addition to plain whipping on a rope. It is added partly to strengthen the whipping, particularly on large ropes, and partly for devorative purposes.

A double loop knot that is tied in the bight in which the two loops are splayed. Formerly used at sea for lowering a man from a height, or raising him aloft. 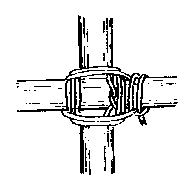 The standard lashing used to fasten two spars or poles together, not necessarily at right angles, where there is no tendency for them to spring apart.

Definition: That part of the rope which is not actively in us in tying a knot, as distinct from the bight and the end. See illustration under Bight.

Definition: An endless loop of rope, usually a length the two ends of which are spliced together; used for slings, to hold a block or to fasten one to a rope along its length. Also the rope (wreath) fixed round a wooden block.

This is a variation of the Reef Knot in which an extra turn is taken at the start to help prevent the knot from tending to loosen while being completed. Used by surgeons for tying a ligature and by us for parcels, etc.

A loop knot used in climbing and mountaineering and intended primarily for nylon ropes. Usually attached to a karabiner on the waist loop. Named by its inventor, the well known British climber.

A variation of the Reef Knot in which the ends are on opposite sides. Useless but interesting owing to the legend that it was made by sailors to catch thieves who presumably assumed it to be a Reef Knot.

Definition: A metal eye, round or pear shaped, inserted in an eye splice or a cringle, etc., when another rope is intended to run through the eye. Often used in the Honda of a lasso.

One of the simplest yet most effective of hitches. Used on spars, bales, etc., for commencing a diagonal lashing, and with extra half hitches added, for towing or dragging, etc.

This is sometimes considered as a Handcuff Knot but is somewhat inferior for this purpose to the knot which usually bears that name. It is a good knot with which to commence a slightly fancy Sheepshank. It is also used as a trick knot (it can be tied in a flash in almost a single movement) and is sometimes called the Conjurer's Knot.

There are a number of knots which have been given this name from time to time, including the Middleman's Knot, but the one shown here, also known as the Shamrock Knot, appears to have the best claim to the title. It is also known in the Far East where it is often found on Chinese Priest Cords

Also called the Tucked Splice. When two ends of small stuff have to be joined together in the middle of a job, such as a serving, a knot might be too bulky. The Tucked Bend bulks less than a Reef Knot and is useful for such purposes.

Sometimes known as the Makline Eye Splice. It is mainly used in small stuff but is often used in the centre of a long guyline when it is required to fit over the 'dolly' on the top of a tent pole. 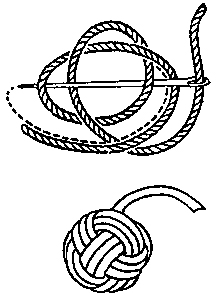 The Turk's Head is, more accurately, a system rather than just a knot, generally tubular in form, decorative and very useful. Basically a binding knot, but can be worked flat for decorative purposes. Can be made with separate strands (Standing Turk's Heads) or with a single, continuous strand (Running Turk's Head).