The Incas in Peru built and goverend well a huge empire but never discovered the art of reading and writing. They evolved, however, a decimal system of numbers by which records of every conceivable nature were kept. This decimal system was operated by means of knots on lengths of cord of various colours which were known as Quipus.

When two ropes of widely different thicknesses have to be bent together, the conventional bends are virtually useless. The Racking Bend, however, serves the purpose excellently.

The best known and most useful parcel knot. It should preferably only be tied with the two ends of the same material, but should never be used as a bend. It is the best knot for tying a triangular bandage.

Definition: Short lengths of rope sewn through a sail by means of which it can be snugly tieddown when 'reefed' - with Reef Knots, of course. Called 'points' because the earliest ones which were made of sinnet were tapered or pointed.

Definition: In seizings or whippins, a second layer of turns over the first and always one less in number. 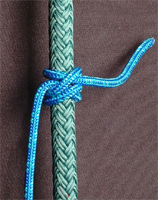 A knot used to fasten a small rope to a larger one when the pull is at an acute angle. Used, for example, for hauling a tow rope by means of a thrown line. See also Magnus Hitch.

This file is licensed under the Creative Commons Attribution ShareAlike 2.5 License.

Definition: When the two legs of a loop cross the rope has 'taken a turn'. If one leg is taken round a second time, i.e. a second cross, it is a Round Turn. Taken round a third time makes Two Round Turns.

Round Turn and Two Half Hitches 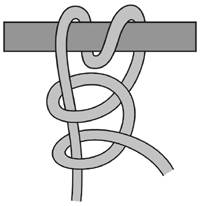 Bearing in mind the definitions, the name is self- explanatory. A good hitch in almost all circumstances.

The knot which was universally used at sea whenever a noose was needed. Useful for commencing to tie a parcel.