Three plain or hawser laid ropes which are righthanded, laid up together lefthanded, making a nine-strand rope.

As a unit of measurement, 100 fathoms. As a length of actual cable, usually 120 fathoms.

An excellent knot, probably the nearest to the perfect bend. It is symmetrical, easy to tie, will not slip nor ham, is very strong and is easily untied. Its particular use is as a bend for hawsers and cables. It can be used in two forms, drawn up or open and seized and it should always be tied so that the two ends are diagonally opposite.

The most suitable Hook Hitch for slings and probably the best. It cannot jam and spills immediately when taken from the hook. It is particularly suitable for heavy lifts.

The nearest there is to a general utility hitch. It is easy to tie in a number of different ways and to untie. It has a wide variety of uses but care should be taken not to misuse it: it is so easy to use it when a more suitable hitch (e.g. a Rolling Hitch etc.) would serve better. 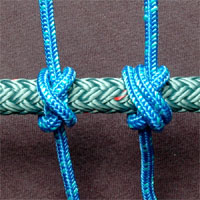 The best and most secure of all binder knots. Provided that it is tied on a convex surface it cannot slip and grips like a boa-constrictor, hence its name given it by Ashley who discovered it. It is, however, often very difficult, and sometimes impossible, to untie it.

These images have been released into the public domain by their author, LadyofHats.

Definition: The general term for all twisted or laid-up rope, irrespective of size or material.

Also called the Crossed Running Knot. When tied loosely, the standing part can be pulled and the knot slid to the required position: a pull on the end then locks it.

A knot closely allied to splicing in which a single strand is worked into another rope, such as the bolt rope of a sail, to provide a loop, usually to retain a thimble. 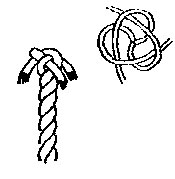 A knot that is tied in the end of a rope with the unlaid strands. It is seldom, if ever, used on its own but as a constituent part of a multiple knot, e.g. a Wall and Crown, etc. It is also used to commence a Back Splice. The Crown Knot is the exact opposite of the Wall Knot. 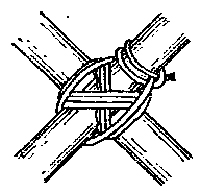 A lashing used for two crossing spars when it is neccessary first to draw them together. Commonly used for the centre lashing of the diagonal braces on a Treatle. 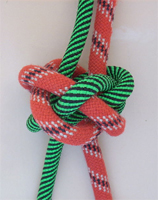 Diamond Knot - A knot tied with the unlaid strands of a rope to provide a stopper or a foothold, etc. Also used as a decorative knot, for example, in lanyards. Can be increased in size and improved in appearance by 'doubling'.

Another name for the Sheepshank.

This has one more turn than the Blackwall Hitch and is sometimes recommended as being more secure. It is doubtful, however, whether this is the case and it would appear that this is an instance where the simpler form of the knot is to be preferred.

The Sheet Bend is never truly safe and secure when one rope is thicker than the other. The Double Sheet Bend is a variation in which an extra turn is taken and, although it is no stronger, it is more secure. Still another turn can be taken , if thought advisable, making a Triple Sheet Bend.

Permission is granted to copy, distribute and/or modify this document under the terms of the GNU Free Documentation license,