Also called the Lubbers Knot. It resembles a Reef Knot superficially but it is inferior and should never be used. As the two half knots are tied in the same direction and not opposite as in the Reef Knot, it tends either to slip or to jam, or both. 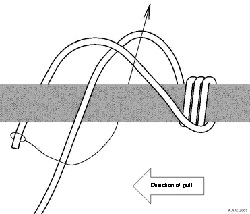 This hitch is a modification of the Sailor's Hitch that allows a lengthwise pull on smooth spar, even if tapered. This hitch even outperforms the Icicle Hitch in this regard. Ensure that the hitch is tight before applying the lengthise pull. (The pull should be steady.) 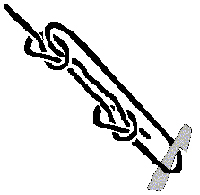 Start with two overhand knots fairly close to each other, rope round peg, back upwards then DOWN into the two knots. Will adjust by pulling and jams to your adjustment. Needs no other knot to hold tight! 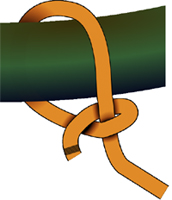 A single hitch made with one end round its own standing part. It is not secure on its own and is usually the beginning of a more elaborate hitch.

An excellent hitch for securing a rope to, say, a ring. It is untied simply by taking the end out of the loose bight and pulling it. Ashley states that this knot is used the world over for hitching horses.

A double loop knot suitable for use for handcuffing a prisoner. One loop is placed round each wrist, both ends pulled tight and then hitched round the neck of the loop. Basically, it is identical to the Fireman's Chair Knot when completed.

Definition: A small tackle kept handy for small jobs, consisting of two blocks, one with two sheaves (pulleys) and the other with one, ready reeved. The Harvester's Hitch, when used as an emergency tackle, is sometimes incorrectly called a Handy Billy.

This knot needs no definition. It is made with eight or nine turns and not thirteen as is often superstitiously suggested. Apart from its obvious function, it is a useful knot for the end of a lanyard.

A useful knot for small stuff in tying parcels, bales, etc. as it can be pulled tight and tied while under tension. It will not capsize and is very secure.

Sometimes also called the Haymaker's Hitch. Used by lorry or truck drivers to secure a load. When a trapaulin is thrown over the load and is being tied down, additional purchase is obtained by the use of this knot and the rope drawn much tighter. The knot is also useful as an emergency tackle when blocks with sheaves are not immediately available.

Definition. A plain laid rope, laid up righthanded, large enough (from 5 to 24 inches in circumference) for towing and mooring.

Various arrangements are used to provide a weight at the end of a rope which has to be thrown any distance. That shown here is based on the Hangman's Knot and is widely used. The best of the several knots for this purpose is probably the Monkey's Fist. 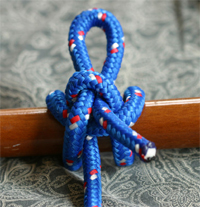 A most useful Draw Hitch for securing a horse, a boat, etc. or in self rescue work. The knot will take any amount of strain on the standing part but spills the moment the end is pulled. Legend has it that Dick Turpin used this knot on his nefarious errands: if in a hurry to escape, he just had to leap on his horse, Black Bess, at the same time snatching the end, when he was away.

Definition: A knot which secures a rope to another object such as a post, spar or ring, etc, or, in certain circumstances, another rope, e.g. a Rolling Hitch.

Definition: The perpendicular edge of a sail or flag which is next to the mast or flagstaff. 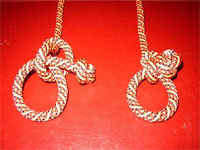 A knot for making a lasso: it produces the most nearly circular of all loop knots. It is made simply by putting a knotted end through an Overhand Knot. It is sometimes called the Bowstring Knot but present day archers prefer to use the Timber Hitch or else a bowstring with two permanent loops.