There is much confusion between the Magnus Hitch and the Rolling Hitch and some authorities consider them to be the same knot. It is sometimes accepted that the Magnus Hitch is the form used on spars while the Rolling Hitch is the form used for hitching one rope to another - generally a smaller one to a larger. In both forms the strain can be taken at an acute angle. 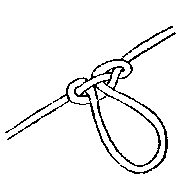 Also called the Artillery Knot. A loop knot tied in the bight through which an arm can be put up to the shoulder to assist in hauling, while leaving the hands free. Formerly used on gun carriages, one end of the rope being fastenend to a ring on the end of the axle.

A multi-strand knot in the end of a rope consisting of a Double Wall and Double Crown. Tied in the end of manropes and sideropes to provide a hand hold. It was properly made in four-strand rope and was often canvas covered.

Definition: A metal tool with a knobbed head and tapering to a point. Used for tightening seizing, etc., and for opening strands when splicing. The knobbed end is used for pounding.

A temporay hitch made with a Marlingspike, or a tent peg, etc., when extra strain is needed to heave a small rope taut, as, for example, the turns of lashings or seizings. Also used on occasion in Sheepshanks or Harvester's Hitch.

Also called the Englishman's Loop (in America) the Fisherman's or Angler's Loop, and it is one of the several knots known as True Lover's Knot. It is a useful loop knot tied in the bight by one of at least four different methods. Once much used for the middleman on a rope in climbing, but now superseded for this purpose by better knots such as the Alpine Butterfly.

An excellent hitch that can be temporarily or permanently made. When used to make a loop, it can be slid to adjust the loop for size. A good knot to know if you have fallen in the sea and a rope is tossed to you. Also useful as a Guyline Hitch or to substitute for a broken slider on a guyline. It is identical in form to the Rolling Hitch.

A knob knot at the end of a rope, usually made round a pebble or ball of lead, etc. It is the best heaving line knot, the heavy core in the knot giving it the weight to carry the mass of the line when thrown.

Permission is granted to copy, distribute and/or modify this document under the terms of the GNU Free Documentation license,

If an appreciable load is to be on a block the hook should be 'moused'. This strengthens the hook and at the same time prevents the rope from jumping out. A 'mouse' is also raised on a particular rope to prevent anything slipping off: in this case the diameter of the rope at the particular place is increased by building up with turns and riding turns.

Definition: A loop which is made with the end round its own standing part in such a way that it draws tight when hauled upon. Often erroneously callled a slip knot.

The Simple Noose or Noose Knot is simply an Overhand Knot but with the final tuck made with a bight instead of an end.. A Noose made with a base of the Figure-of- Eight Knot is to be preferred. See also the Running Bowline.